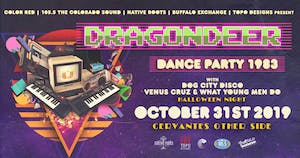 On June 11, 2019 Color Red will release a digital 45 by Dragondeer, one of Colorado’s fastest rising acts that have turned heads across the country with a distinctive blend of psych-blues and soul. The release coincides with Dragondeer’s active summer schedule including key festival plays at Firefly Music Festival in Dover, DE, Summerfest in Milwaukee, WI, and Electric Forest in Rothbury, MI.

“Mirage Á Trois” and “Max Patch” find the group exploring new sonic territories with the help of Jordan Linit on guitar (Analog Son) and Jeff Franca on percussion (Thievery Corporation). “Mirage Á Trois” takes late-night downtempo disco flavors reminiscent of Portugal the Man and Gorillaz and tells the tale of inner-conflict between the proverbial “me, myself, and I.” “Max Patch” is a smoky-mountain funk tune that tips its hat to a carefree, moonshine-drinking jam session that transpired in a cabin at the highest point in the Appalachian Mountains. Both tracks represent the collaborative nature of Color Red and the community within the Colorado music scene.

On expanding their sound, Dragondeer’s Eric Halborg details the decision to partner with Color Red on these brand new tracks:

“Dragondeer has been naturally adding shades of old school funk to the swampy blues and soul that's been our forte. Going into the Color Red sessions, we consciously allowed ourselves to go into new sonic territories. The tracks were inspired by the classic sounds of Stax Records and The Meters catalog coupled with the indie dance floor sensibilities of Gorillaz and Portugal The Man. The Color Red studio provided the perfect space and vibe to explore and be creative musically all while being captured to analog tape and produced by Sunsquabi's Josh Fairman. We love the fact that Color Red encourages collaboration between artists. Both of these new Dragondeer tracks include special guests. Percussion from Jeff Franca of Thievery Corporation gave us the extra motor and shake the tracks needed, while the guitar work of Jordan Linit of Analog Son delivered the perfect 70s guitar driven funk that we had envisioned.”