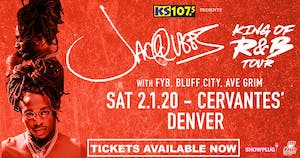 When Jacquees proclaimed himself “King of R&B…of his generation,” he did so with the accolades and achievements to back up such a bold, brave, and big claim.Within six years since the release of his independent breakout mix-tape Round of Applause, the Atlanta singer quietly ascended to the genre’s vacant throne over the course of a banner 2018 and 2019. During that time, his critically acclaimed full-length debut forCash Money Records, 4275, earned a platinum smash in the form of “B.E.D.”—which also received a nomination for “R&B Song of the Year” at the iHeartRadio Music Awards—as the follow-up single“You” went gold. Plus, it maintained his heat, standing out as his second most-streamed song, nearing 100 million total streams by 2019. Not to mention, the latter served as a staple from the Documentary Soundtrack for Before Anythang and Lost At Sea II—his collaborative project withBirdman. He joined forces with Dej Loaf for the dynamic duet “At The Club,” which featured in Before Anythang as well and put up another 50 million Spotify streams. Plus, he lent his voice to TK Kravitz’s gold-selling “Ocean,” extending his influence throughout the game.