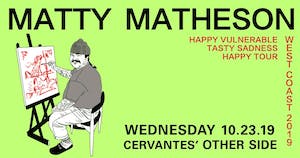 Matty Matheson has transformed from early New Brunswick beginnings to the

newly appointed face of the TV chef. His TV show, Dead Set On Life, was one of

the first original series on the newly minted VICELAND television network in 2016.

Since it’s debut, Matheson’s skill set and charisma have propelled him to internet

superstardom with a dedicated social media following. He has been featured