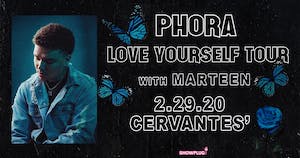 *** ATTENTION PHORA TICKETHOLDERS for Phora, who was scheduled to perform at Cervantes' on Thursday, February 6 ***

As everyone knows, due to circumstances beyond the venue’s control, the show had to be postponed.

Saturday, February 29 has been confirmed as the make up date.

Tickets purchased for the original date of Thursday, February 6 will be honored on the new date of Saturday, February 29.

Anaheim-born rapper Phora has announced his follow up tour to the wildly successful “Bury Me With Dead Roses” tour, which sold out in 30 minutes. Phora will hit the road in January and February with special guests on the “Love Yourself” tour.

With over 500 million streams on Spotify and Apple and 325 million YouTube Streams, Phora’s latest release, Bury Me With Dead Roses (his first independent album since 2017) has received praise from the New York Times, Billboard, Los Angeles Times, Noisey, MTV, XXL, Vibe, Forbes, BET, Uproxx, HipHopDX, and more. Featuring production from critically acclaimed producer Scott Storch (“Blame On Me”), appearances from Universal Latin recording artists Ecko and Mariah (“Te Necesito”) and production from the Yours Truly Records stalwarts Anthro Beats and Native, the album hit the top 25 on the overall charts and top 10 on the rap charts. From start to finish, the album touches on love, loss, life, grief and sorrow, with Phora urging his listener to “Not take your life for granted and appreciate people while they’re still here.”