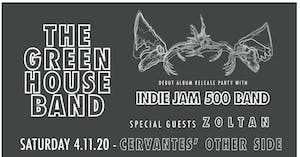 The Green House Band has been postponed. Tickets purchased for the original date will be honored on the new date.

The Green House Band is a rock band from Denver, Colorado rooted in americana and soul. The rhythm section of this six-piece group finds deep, tight grooves as the lead players and singers trade off dynamic improvisations before returning to catchy and inspired riffs and lyrics. Inspiration is drawn from musical greats such as The Allman Brothers, Led Zeppelin, The California Honeydrops, The Clash, Lake Street Dive, and Tedeschi Trucks Band, while their songwriting is authentic and original. Band members Joe, Tommy, Matt, Hayden, Marlee, and Michael echo sounds from their past homes of New Orleans, Kansas City, Nashville, New York, and St. Louis as they release their debut album and deliver electric live performances.

The Indie Jam 500 is a supergroup comprised of local Denver musicians involved in the Jamband scene who have a deep love for indie rock and psych rock music. Featuring members of Mama Magnolia, Other Worlds, Tiger Party and more, this group has been tasked with the mission of creating a setlist full of everyone's favorite indie rock songs and giving them the royal jam treatment by extending and improvising over them! With many special guests still to be announced from all of your favorite local Denver bands, this will surely be a unique concert experience for fans of jambands, indie rock, psych rock, and all music lovers alike.