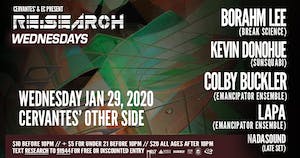 Borahm Lee's masterful use of Ableton Live and prowess atop an assortment of analog synths, Fender Rhodes, and digital plug-ins propel Break Science's towards the new frontier. Lee has worked with cultural icons like Kanye West and The Fugees, he is well versed in reggae/dub vibrations.

As a diverse performer, Kevin Donohue has spent considerable time on the road with electronic acts that include Big Gigantic, Pretty Lights, GriZ, Murphy of STS9, Up Until Now, Two Fresh, Conspirator, Michal Menert, Boombox, The Floozies, Archnemesis, Break Science, Minnesota, Ghostland Observatory and many more.

Colby Buckler is a versatile drummer with a unique style and sound thriving in the electronic music scene. He is the full time drummer for Emancipator Ensemble and currently playing with multiple artists such as Dreamers Delight, Marvel Years, ProbCause, and Maddy O’Neal. Colby is a freelance artist, being versatile and adaptable to all genres of music, making him one of the most sought out and go to drummers in the scene today. He has played with many artists such as Two Fresh, Manic Focus, Cherub, Griz, Michal Menert, Conspirator, Eliot Lipp, Break Science, Mimosa, Dominic Lalli of Big Gigantic, Borahm Lee and Chris Karns of Pretty Lights Live, Amp Live, Jesse Molloy of Panic at the Disco, Milky.Wav, Raw Russ, and many more. With 2016 being one of the most focused years of his career, Colby played a full European tour, two sold out red rocks shows, tons of festivals and much more, shaping 2017 to be even more of an explosive year for this drummer. Buckler has many more shows to come for the rest of the year including three Red Rocks plays, numerous festivals, a lengthy fall tour, and many more in-between.

Venue Information:
Cervantes' Other Side
2637 Welton St.
Denver, CO, 80205
Sign up for our newsletter