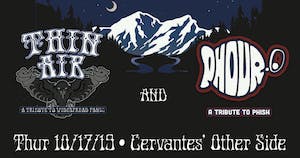 Thin Air - Thin Air, from Denver CO, is a Widespread Panic Tribute Band that strives to capture the essence of WSP in sound and delivery. The band closely replicates the songs as best as possible for a "live performance" experience.

Phour Point O- Covering arguably the second most popular jam band of all time is no easy task especially considering it's more than just playing the orchestrated parts, you need to be able to jam and lucky for Phour Point O that's where they really shine. Their shows show their ability to bliss out phans with patient and soulful playing. The attention to detail and fantastic playing really sets this band a part from the plethora of phish cover bands out there.